Solpadeine Is My Boyfriend

Produced by: With An 'F' Productions 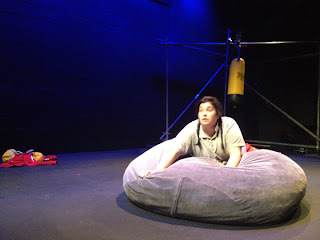 Solpadeine Is My Boyfriend is about a new Irish generation. They were promised everything; a life of financial stability and job security but they now find themselves queueing either at the airport to emigrate or the social welfare office to sign on. It's a generation that feel entitled not to experience depression, economic or personal, and whose availability to over-the-counter medication allows them to numb both.

Stefanie's high octane performance is broken up by moments of near stand-up comedy. The piece resonates with all Irish audiences regardless of where they are from due to the mass exodus of young people leaving for Australia, Canada and America.

“And the solpadeine flows past every door, distributing comfort and safety to every pore. The solpadeine army now moves to my head, the other half tackle my heart, they tread, softly and carefully to where the pain is, and anesthetise it with their lovely lovely fizz.”

When the show premiered at the 2012 ABSOLUT Fringe, the run was a tremendous success with a number of sell-out performances, the critics were highly complimentary and the production received two nominations at the Fringe Awards: The Fishamble New Writing Award and the Bewley's Little Gem Award. In January of 2013, the show returned to The New Theatre, Dublin as part of First Fortnight Festival once again to sell-out shows and rave reviews. The production will spend the rest of 2013 on national and international tour, with dates all across Ireland. It has also been invited to both Scrie Despre Tine Festival in Bucharest, Romania and the Edinburgh Fringe Festival.

Solpadeine Is My Boyfriend is supported by the Arts Council of Ireland, Culture Ireland and Cork County Council and was developed as part of Make, a residential workshop facilitated by Cork Midsummer, Dublin Fringe Festival, Project Arts Centre and Theatre Forum.

Posted by Solpadeine Is My Boyfriend 6 comments:
Email ThisBlogThis!Share to TwitterShare to FacebookShare to Pinterest
Home
Subscribe to: Posts (Atom)